Sales Directors and Sales Managers rarely get to their positions simply through loyalty or length of time served.

They’ve most likely been in the sales world themselves and been an excellent sales person.

But this doesn’t mean they will necessarily make it as a manager or director of business.

Indeed, there are many people who direct or manage sales, and they are simply in the wrong position.

Just by giving your best salesperson some Sales Management Training does not mean that they have what it takes or indeed the will and motivation to be a top sales leader.

The Peter Principle, originated by Laurence J. Peter, a Canadian educator, states that employees rise through the ranks via promotion until they reach a level of incompetence.

This doesn’t mean that every person who becomes a sales director will not be competent at the role, but it does mean they have to realise the role involves several different tasks and responsibilities that they hadn’t mastered before taking on the position.

I’ve noticed there are some habits displayed by Sales Directors that can have a negative effect on results and the morale of the team.

These aren’t carried out on purpose; in fact, most of the ones listed here are innocent in nature, mainly because they fail to see the enduring results of these habits.

Take a look and see if you recognise some of them:

Focusing On The Short-Term Instead Of The Long-Term

The sales director’s role is, by its very nature, long-term in its strategic alignment of goals and objectives.

However, many times the overall focus is on how we hit this week’s goals, or what needs to be done in this campaign.

This ‘innocent’ habit can divert attention away from what the real message a Sales Director should be giving – that they are here to support the sales teams achieve a long-term goal or vision, and that the short-term resource management should be left to the sales manager and the team itself.

Leave The Growth And Development Of The Team To Someone Else

Part of the Sales Director’s long term vision should involve supplying the resources for growth and development.

If you expect your sales manager to know about all the resources that are out there for developing their team, you leave a lot of excellent sources for development untapped.

You should take the development of the team seriously, involving coaches and mentors as well as training programmes, so people can advance and grow in their roles as they progress through the company.

Neglecting Their Own Personal And Professional Development

Linked to the above is the fact that many Sales Directors neglect their own professional development too much.

Yes, you may have been successful at your sales role, but that was a previous responsibility.

Your development now should involve analysing the skill-sets you need to be successful in the function you are pursuing now.

Those could involve strategic and critical thinking skills, competitive analyses, business skills above and beyond the balance sheet, and the future needs of leadership.

Be Too Involved In The Minutia

Sales Directors tend to be apart from the day-to-day machinations of the sales team and this can cause some to want to enquire about the incidentals of the routines that go on.

They may feel a little left out if updates are passed on every hour on successes or overall results.

So they dip their finger in that proverbial pie and seek refuge in being wrapped up in the minutia of the moment.

There’s absolutely nothing wrong with wanting to know results and in getting feedback on how people are performing.

However, when it becomes a habit, and you develop a pattern of being too closely involved, you stifle creative thinking and it can become an addiction where you get your daily fix concentrating on things that are outside your domain.

Managing Too Much, Leading Too Little

People don’t want to be managed.

But they sure do require good quality leadership!

Your role should be to provide the leadership that people should want to follow, regardless of what position you hold.

If you can spend more time developing your leadership skills (asking questions to make people think deeply, improving your listening skills, being a skilled director of the sales operation so it makes it easier for people to do their jobs, etc.) you create an environment for people to thrive and show their natural, maybe latent, talents

Recruit With Too Much Emphasis On CVs

There are many people who have achieved great results at one company and failed miserably at another.

The skill-sets they possess with one product may not lend themselves to be effective with others.

A person’s CV only goes so far to let you know their characteristics, their communication skills and their abilities to think on their feet.

If you put too much emphasis on the history of a person through their CV, you may take the importance off their abilities needed to make a success of the role you’re recruiting for.

So, resist the temptation to habitually focus on what’s happened in the past, rather than identifying the traits you need them to develop for success in the future

Not Building A Sales-Savvy Culture

A business’s culture could be described as ‘the way we do things round here’.

It’s the forces that drive how you work and what morale exists within the team.

A culture that is ‘sales-savvy’ looks at what is happening in the big picture environment.

It builds attitudes of ‘can-do’ and reduces the claims of outside pressures reducing opportunities for growth.

This is an easy culture to allow to develop because it’s so insidious in its nature.

Weeds grow whether you want them to or not.

The answer is to pull out the weeds and move on, i.e. recognise they exist, deal with them and plant other flowers instead.

Habitually concentrating on what you don’t want will naturally bring them into the environment.

Working on what you do want should help resist the slide into mediocrity that failing Directors often experience.

Those are just a few innocent habits that failing Sales Directors often fall into. How do you resist them?

By concentrating on their direct opposites and being a sales Director who produces an environment for people to grow and develop with you as their catalyst. 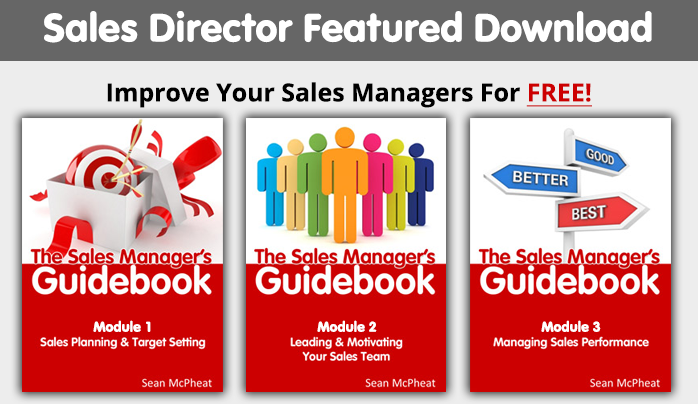