Get Rid of the “Pitch” Mentality 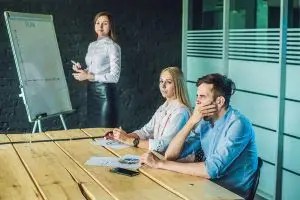 I am not quite sure of how the word “pitch” ever became associated with professional selling. The term has been around since the late 1920’s and I imagine that it may have started in relation to the game of baseball.

No matter what the version, be it British, English or International, the ball-and-bat game is very similar.  A “pitcher” throws a ball at a “batter” who attempts to hit the ball.  The pitcher’s objective is to get the ball pass the batter or to strike him out.   There are only two possible outcomes in such a scenario; either the pitcher wins or the batter wins.

You hear sales people often speak about “losing” the sale, or “winning” the sale.  The pitch mentally says that the sales process is essentially a war, a battle in which someone wins and someone loses.  The pitchman’s objective is to win or beat the prospect.

There is No Win – Lose Situation in Selling
However, in professional sales, there is no such thing as a win-lose situation.  If you make the sale, you helped the prospect and you both win.  If you fail to close the sale, then you failed to help the prospect get something that would benefit them and therefore, you both lose.

Get rid of the pitch mentally and be a sales professional who deliverers a win-win outcome!