How A Salesperson Made A Great Impression 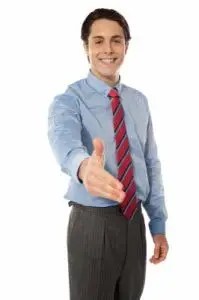 I love buying things. But I hate being sold to.

I’m sure you’ve heard that many times, and have experienced it yourself so many times, too. And I had an example recently where I was sold to, but didn’t even realise it.

Every now and again, I’m forced to go shopping with my wife Donna and daughter Holly. By ‘forced’, I mean they aren’t strong enough to carry the bags, so the pack mule has to accompany them on the expeditions that makes only one part of me lighter; yes, the wallet.

Just kidding, of course; I love spending time with the girls, and it gives me an opportunity to look at shops I like, while they wander off into the girl’s paradise areas called ‘shoes and toys’.

Anyway, while wandering, I passed a jewellery store that had some especially enticing items on display. One particular necklace caught my eye, and I found myself obeying the Law of Attraction towards toward the ‘counter-of-much-delight’.

I decided on an impulse buy of the necklace and offered the payment. This is when I was sold something without even realising it.

The assistance said ‘Seeing as it’s a special gift, would you like it wrapping in something nice?’

This innocuous question caught me off guard and I immediately said ‘yes’ with no alternative thought crossing my mind.

As she wrapped it for me, she said ‘This  addition makes it look so beautiful, doesn’t it, with the bow and everything. And for the extra £2 it really makes it special, don’t you agree?’

I was caught, hook-line-and-sinker.

I even thanked her for charging me the extra money, even though she had embedded it in the selling question. I’d have felt a proper skinflint if I’d said ‘Oh, it’s an extra £2? No, unwrap it, please’.

How did I feel afterwards? Duped? Forced? Sold to?

Actually no. I felt grateful that I had gone the extra step to make it special. And the specific amount didn’t seem too much, even though the actual paper and bow would have only cost a few pennies in reality, if I’d bought them in the shop opposite.

This salesperson made a great impression on me, simply by offering something that added real value to the gift and not embarrassing me by asking if I wanted to pay the extra money. She just assumed it was OK, which under the circumstances was perfectly all right.

I may go there again for Don’s next present, too!