How To Knock On The Telephone

Every sales person knows that today’s modern buyer has had enough of the old smile-and-dial cold calling methods of the past. However, as mentioned in, “4 Reasons Why Prospects Fear Cold Calls,” most buyers still seem to harbour fear and animosity toward receiving a telephone solicitation call.

Many feel a cold call…

#1. Is an invasion of their privacy
#2. Is a violation of their personal space
#3. Puts them at a disadvantage since, the caller has information about them, yet they know nothing of the caller
#4. Leaves them with no control 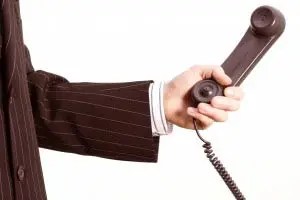 A Lack of Control
The main problem with cold calling is that the buyer feels as if he or she has no control over the situation. They could not stop the caller from gaining entrance. Once they just answer the call…that’s it…the caller is virtually right there next to him! The cold caller is essentially an intruder, who barges into the prospects place without invitation or announcement. That lack of control and power creates the fear buyers feel.

It is that fear that causes buyers to react in a defensive manner; saying things like they are not interested even though they do not know what you sell or hanging up the phone.

Turning An Intruder Into A Guest
However, there is one way such an intruder could become a welcomed guest, and that is by simply knocking on the door. Behind the closed door, the buyer has the option to allow the person in or not—they have the control. Since the buyer has control, they do not fear.

This is the problem with cold calling. There is no knock, no announcement and therefore no way to help the prospect feel in control. If you could knock on the telephone and give the prospect a sense of control, they would not fear you. When the prospect does not fear, there is no reason for them to raise defensives and you are able to speak to a more open mind.

How to Knock on the Telephone
This technique is so short, inconspicuous and simple, that at first it will appear not to make any logical sense. However, I urge you just to try it, as it is extraordinarily powerful and effective.

#1. Fumble
Almost every normal, natural telephone call begins with a fumble; that is a short stutter or miscue, almost as the caller gathers his or her thoughts for just a second. When cold calling, sales people take out that and other natural tendencies that are present in everyday speech. Start the call with a little hesitation to give the call a normal and natural sound and prevent the prospect from immediately becoming defensive.

Instead of…
“Hi Sarah. This is Steve Smith with ABC Widgets…”

#2. Raise the Tone on Your Introduction
Next, slightly raise the tone of your voice at the end of your introduction sentence; making it a question. Just slightly, elevate your voice on the last word or two as if you are asking a question or seeking confirmation from the prospect.

#3. Pause
After your raise in tone…SHUT UP. Wait for the prospect to respond to your non-verbal question.

Now I could spend the better part of a week explaining what you actually accomplish with this. But here is just a few golden rewards…

1. With the fumble, you did not aggressively charge the prospect or burst in the door, like an intruder. Helping the prospect to stay relaxed and dispelling the image of the stereotypical cold call.

2. With the raise in tone, you essentially asked the prospect a question. You asked them to confirm who you are. In a sense, you are still on the outside of the door, as the prospect takes a gander through the peephole.

4. 80% to 90% of the responses to your nonverbal question will be in the form of a simple nod-of-the-head, “Uhm um” from the prospect. The prospect essentially says, “Yeah, ok…what can I do for you?” Or, “Ok, what do you want?”

5. Then with that nod-of-the-head confirmation, the prospect has, (in not so uncertain terms), asked you to explain the reason for your call. He or she has given you permission to continue.

6. In less than six seconds, you have…
a. dismissed the image of the stereotypical telemarketer and cold caller
b. created an unthreatening image in the mind of the prospect
c. given the prospect a feeling of control
d. obtained an invitation to tell your story
e. promoted the prospect to say “Yes” once already!

What more can you ask for?