Home » MTD Sales Blog » Should You “Wing It” or Have A Structured Sales Interaction?

Should You “Wing It” or Have A Structured Sales Interaction? 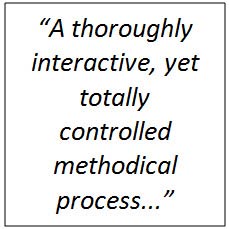 Whenever the idea of a planned presentation comes up, usually the first thing sales people think about is a “canned script.” In a canned script, I am referring to the old-fashioned, smile-and-dial era, word-for-word, rehearsed, “Pitch.” Such was a primary tool of sales people, in particular telemarketers, years ago. Alternatively, we had the opposite of the canned spiel with the show up and throw up method, where sales people just walked in and did whatever they thought came natural.

While most sales professionals have rose above the smile and dial pitch, the question arises of the validity of using a planned sales presentation today. While not exactly a throw-up tactic, many still believe it is best to know all you can know about your product and prospect, and then just go in and let the sales interaction flow impromptu, directed by the prospect’s interests. So, dealing with today’s modern and educated buyer, should you play-it-by-ear and wing it, or use a planned and structured sales interaction?

Defining a Planned Sales Interaction
I believe that for the majority of selling situations, you should use a well-planned and structured sales presentation; but allow me to define exactly what I mean.

Although with a planned presentation, you may have a few words or phrases that you might use verbatim, I am not talking about a canned script. By a planned presentation, I am referring to “a thoroughly interactive, yet totally controlled methodical process that systemically moves the sale through incremental, yet critical stages, accomplishing interim goals at each step, while maximizing the odds of closing the sale.”

You can keep your sales interaction feeling impromptu, but you must have a way to control the direction and outcomes. You should have a step-by-step process that leads to a successful conclusion. In such, you can maintain the flexibility to adapt to responses, yet keep the process on track towards a narrow objective.

A Strategy
A Planned sales interaction is a strategy. With a planned interaction, you want to know what you need to accomplish at each stage of the presentation. For instance, in your first step, you may want to design proper seating arrangements as soon as you arrive. Or you may want to find out more about the prospect’s delivery systems during your warm-up talk. Perhaps you need to uncover more about the current contract the prospect has with a competitor.

In your second stage, perhaps you need to uncover exactly how much the prospect is spending on the outdated system, how much time their people are wasting due to lack of training. It is a plan on what you need to accomplish and when.

Planned VS Canned
So what is the difference between a planned sales interaction and a canned pitch?

In dealing with today’s sophisticated and educated buyer, now more than ever, you need to have a well-thought-out plan. You must have a strategy to accomplish every sales goal, including just setting an appointment.