What ALL Sales People Must Do Before Getting Back To Clients 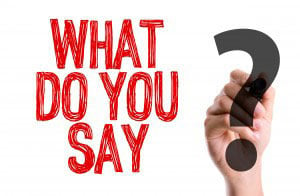 Aren’t they the same thing? Don’t they mean exactly the same and they’re just semantically different?

Well, not really, and it’s important to know the difference so we can choose which one to use.

Have you ever crossed one leg over the other and someone tapped your knee in a certain position, and you found your leg kicking out?

According to Wikipedia, striking the patellar ligament with a reflex hammer just below the patella stretches the muscle spindle in the quadriceps muscle.

This produces a signal which travels back to the spinal cord and synapses completely independent of higher centres.

This triggers contraction, and this, coordinated with the relaxation of the antagonistic flexor hamstring muscle causes the leg to kick.

In other words, you have no control over it as it’s an unconscious reaction.

Have you ever said or done something and then said something like ‘sorry, I didn’t mean that’ or words to that effect?

Then you’ve been in reactionary mode, not thinking something through but reacting in a way that you often feel is out of your control.

Now, responding means where you have taken time (sometimes seconds, sometimes much longer) to reply or return.

It comes originally from the Latin ‘respondere’ meaning a promise or a pledge.

Naturally, you wouldn’t promise something without thinking it through first, so the common thought that goes along with ‘respond’ is that it has taken a little longer to think through, and hence gives you time to decide how you will reply or deal with a situation.

We often say ‘react in haste, repent at leisure’.

This shows the main difference between the two terms.

If a customer or prospect says or does something that immediately makes us defensive or aggressive, we might react in a way we will regret later.

Ever send an email off when you’ve been angry and then tried to retrieve it but it’s too late?

Much better to stop, analyse, think it through, review the consequences, identify what would be best to say or do and then carry it out with forethought and consideration.

That way, you are responding consciously, and it’s within your control.

You haven’t reacted on an emotional high and you can now accept the consequences without regretting how it was done.

So next time you face a dilemma with a client, think to yourself ‘I’m not going to react; I’m going to respond’.

Then, you won’t suffer from that knee-jerk reaction and things might turn out better for you.