The 3 WORST Practices For Conducting A Successful Sales Meeting

While a good sales meeting can invigorate sales people and increase revenue, a poor sales meeting will cost you more than you can calculate. Incredibly, many sales managers take the structure of a sales meeting for granted. It is the old, “If it’s not broke don’t fix it…” attitude. 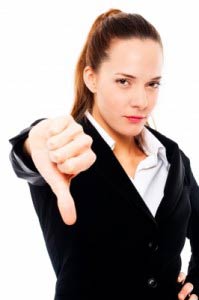 However, here are three basic things to understand about sales meetings:

1. There is no such thing as an ineffective sales meeting. Sales meetings have either a positive effect on your sales team, or a negative one.

2. The sales meeting is never the blame. When sales are off, typically the blame falls on sales people, market conditions and everything else, other than sales meetings.

The point is that just because it does not appear to be broken, does not mean it is not. Below are three DON’Ts, the worst practices for conducting a good sales meeting. Then, posting December 15, 2011, I will detail the three best practices, the DOs for sales meeting success!

#1. DON’T Berate
While you may never have a conscious goal to demean sales people or in anyway, put someone down, it happens all the time in the sales meeting. When a sales person has a problem, or is not performing well, it is easy to use that person’s situation as an example. Never point out someone’s shortcomings in a group sales meeting. Always discuss a sales person’s negative issues in private. Also, remember that as I explained in the post, “The Zero Tolerance Approach to Sales Management,” that a sales person’s failures…are actually YOUR fault!

#2. DON’T Intimidate
Be careful not to intimidate sales people with pressure or threats. Some managers believe that negative motivation is a useful tool in that fear is a far stronger emotion than desire. While it is true, that fear can get people to do things they might not otherwise do; unfortunately, that includes the good as well as the bad things. In addition, when you intimidate one person in front of the group, the negative affects spread like an airborne virus throughout the group. Also, be aware that you can intimidate people without actual threats. Challenges and goals that are beyond the sales person’s belief or imagination, can intimidate, frighten or embarrass a person when done in front of other people.

#3. Subjugate
By definition, to subjugate is to bring a group under control or submission by force: to overwhelm, overpower and conquer them. Unfortunately, such is the organisational philosophy of many sales managers. Demanding better performance is not managing. To lead, people must follow, and that does not mean forcefully dragging them behind you.

Be careful not to build yourself up, in meetings. Instead, uplift the team. In addition, never demand the team do things that you cannot, have not, or would not do yourself. You want to lead, not rule. In sales meetings, be careful not so issue orders or commands. Instead, offer objectives and action plans to reach those objectives.

Just as in dealing with a prospect, with your sales team, you need to PULL, not PUSH. You need to ASK not TELL, and you need to HELP not SELL.

Don’t demand that your sales people succeed, and order them to do it. Instead, show them how to succeed and help them do it.