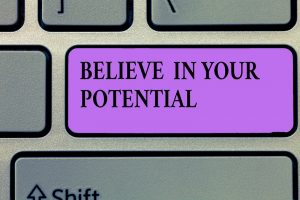 What is a belief system?

Wiki would have it described as a mental representation of an attitude oriented toward the likelihood of something being true.

That means it can’t always be supported by empirical formulae, but is determined by someone’s confidence in an opinion or belief.

To be highly successful in sales, one has to have a series of beliefs that support their thought processes, irrespective of whether they can be scientifically proved.

Once those beliefs become embedded in the psyche of a person, they act as the foundation for specific behaviours and offer a confidence that can overcome many adverse circumstances.

What, then, makes up the belief system of highly successful salespeople?

Here are five components that are shared by the vast majority of effective salespeople:

1) They don’t believe in failure; only outcomes

Failure casts doubt on what we are as a person.

What is needed is a different belief system, one that looks on failure as a learning journey.

So, top salespeople see a failure as simply an outcome, a result, something they have achieved through the way they accomplish or don’t accomplish certain objectives.

By seeing a result as simply that (an outcome) they don’t look back on something they did as a failure…it’s simply something that happened that is now in the past and can’t be changed.

2) Every event is an opportunity to learn

If we consider an outcome as simply a result of what we carried out, we can now learn from it, and from that learning experience comes growth.

If the sale didn’t go according to plan, top salespeople ask themselves ‘what can I learn from this?’ as opposed to ‘what went wrong?’

3) The past is a school; the future is a place to apply it

We should see every experience as a growth opportunity, something we can apply in the future, either as a lesson to learn from and change, or a lesson to see as an opportunity to grow and develop.

All top salespeople see what’s happened in the past as a chance to build knowledge and accept those things we can’t change, while working on things we can.

4) Curiosity is the key to learning

When we blame something or someone else for something we didn’t achieve, we give up control and allow other things or people to control our emotional wellbeing.

Top salespeople instead recognise that, by being curious, they rewdcube or even eradicate, the feeling of blame a guilt-throwing.

Curiosity means they ‘wonder why’ something happened, and are able to apply a learning attitude to whatever needs to be considered.

5) They see they are in charge of their own future

You may be working for a company, rather than being self-employed, but top salespeople recognised that the mindset of entrepreneurial enterprise and spirit is what sets them apart.

By believing they are effectively and entrepreneur, top salespeople recognise that they are in charge of how things work out and, although they may get paid by a company, they recognise that having an attitude of running your own business turns the motivation into one that drives for success, and doesn’t put the blame on others for not hitting targets; instead, they accept that they are in charge of everything that happens to them and want to attribute both success and non-success to areas they personally can control.

So, by putting the emphasis on these five components, a top salesperson will create opportunities they didn’t think possible before, and become the controller of their own destiny.