Are You Really Asking For The Order?

Failing to Ask For the Sale
A problem that many sales people have is that they do not properly ask for the order. They do not clearly ask the prospect 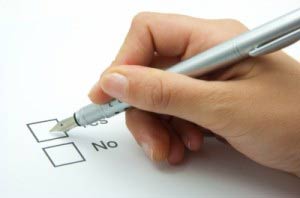 to make a decision.

Now before you say, “Oh, I don’t have that problem…” you may want to read on.

Three Ways of NOT Asking For The Sale

#1. Wait For The Prospect To Make the First Move
One of the most popular closes, (or should I say anti-closes), is when the sales person presents the offer and waits for the prospect to say something. The sales person waits, hoping the prospect will say, “Ok! Give me a pen, where do I sign?” which usually does not happen.

Sales Person looks up at prospect, smiles, and then looks back down at order.

I’m sorry my friends, but this is not asking for the order.

#2. The, “So What Do You Think?” Close
Sales people terrified to ask for the sale, often use this. Since they appear to be asking a closing question, the sales person feels as if he or she accomplishes something, without directly asking for the order and thereby avoiding the risk of direct rejection. The sales person does indeed accomplish something with this close…they make the whole situation much worse.

Sales Person: “Finally, Sarah, we will deliver, install and test the software. The total comes to £3,400 for the first year and then £425 per year in maintenance fees. So what do you think?”

By asking the prospect what they think, you are invoking the wrong part of the prospect’s brain and you still have not asked him or her to make a decision.

Is it any wonder why the prospect eventually responds by telling you they want to THINK about it? You just asked them what they think!

#3. The Incentive Close
Another way that sales people can ask for the sale without clearly asking for the sale is to use some incentive in an effort to stimulate the prospect to action.

“However Steve, if you place an order with me today, not only will we pick up the shipping costs, but we will give you an additional box of the small widgets…absolutely FREE!”

You cannot wait for the prospect to snatch the contract out of your hand and close himself!

Three Ways Of Asking For the Sale