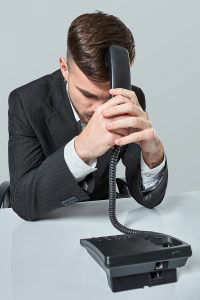 That’s about all you have to say on the telephone today for some prospects to realise five things instantly!

Number one, they know that you are NOT a friend or an acquaintance.

Two, they know that this is NOT a social call.

Three, they know that you probably should not be trusted.

Four, you are invading their privacy and number five; they know that you eventually want money.

By the time you simply said hello, many customers have already began to recoil in fear and disgust.

You may wonder why is it that even before you say very much, many consumers today react with such a negative and defensive stance.

You might think that it has to be due to pre-conceived images and past experiences that have nothing to do with you and it is not your fault.

After all, if all you said was Hi my name is… then how in the world could you have caused any problems?

You haven’t even said anything yet?

Well, you may not want to hear this, but please listen closely.

Although you have said almost nothing, YOU are the cause of the  negative receptions you get on the telephone.

That’s right. I am saying it is your fault.

All you said was, “Hi Mr. Jones, my name is….” and believe it or not, you have projected an image of fear, distrust, and the old boiler-room image that causes people to react in defence.

You see the first thing you must learn to do is do project a positive and professional image of yourself to the prospect.

The problem however, is that you have less than six seconds to do this and if the first three seconds are done incorrectly, you are done.

You need to be able to project a professional and trustworthy image to the prospect almost BEFORE you say anything!!

By the time you say hello and your name, you need to have sent the prospect a clear message.

In fact, you must instantly relay to the prospect five clear and distinct images and messages.

First, you have to project the image that you are a high-level and highly successful professional.

Two, you have to project that you are a well-known and trusted and respected professional.

Three; that you are NOT a threat.

Four, you have to project that you represent a company that is also a trusted and respected leader in the industry.

And five that most of their peers also work with you and trust you and you are someone who is used to getting a good and positive reception.

You need to do all of this, within five or six seconds AND without using any actual words to that effect!

You have to project this image, this picture of who you are and plant it firmly in the prospect’s mind within a few seconds and do it before you start running your mouth.