Why “Always Be Closing” Is Not The Only ABC In Sales… 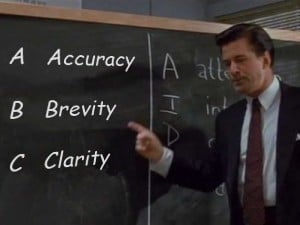 Years ago, I was working with a salesman who considered himself to be one of the best in his business.

If he ever failed, he said that it was the prospects that the company gave him that caused the problem, not him.

If profits from his accounts were down, it was the customer’s fault for wanting something for nothing.

It was never his problem.

I had the ‘privilege’ of going on two calls with him while I was consulting with his company. After the two calls, I realised why he failed more than he succeeded.

He thought he was good because of his product knowledge, his experience and his ‘gift of the gab’.

Actually, what he had was the ability to bore the pants of his prospects with his patter. It would go on and on and on, blinding the prospect with facts, information and background.

He didn’t understand that the whole idea of quality salesmanship is to determine customer needs and then work with them to create a solution.

Basically, he was talking too much and not listening enough.

It reminds me of something I learned years ago when I was picking up sales tools and ideas.

I thought of it as the ABC of selling, as the three terms that have served me well start with those three letters.

Firstly, Accuracy. In sales, you need to be correct and sure of your facts before you make any conclusions or offer solutions. Accuracy involves asking questions, summarising effectively, building confidence in the solution and being efficient in creating options. Being accurate in you assessments builds confidence in your prospect that the solutions you discuss will be appropriate for the challenges they face.

Then, there’s Brevity. You’ve heard the expression, “Why use two words when ten will do!” Many salespeople live by this motto, as they think that the more they tell the prospect, the more they are building up value and knowledge in the prospect’s mind.

Actually, in most cases, less is more. Being brief is the sign of quality thinking. By putting your ideas and concepts in a brief format while still giving the amount of information the prospect requires to make a decision, you prove yourself to be effective and efficient.

Finally, there’s Clarity. Clear communication is the by-word here, and when it’s coupled with accuracy and brevity, you encourage the customer to think through the options and they can make the decision they need to because they’re clear on what is required and can see the results.

So, by combining these three components, you create opportunities for both your prospect and yourself to be sure you’re making correct decisions and recognise when to move forward quickly and easily.