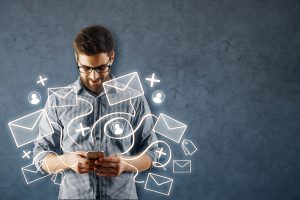 Forster gathers sales data at Prospect.io in order to deliver powerful and insightful advice to salespeople.

Ever seen this stats collection that says that 48% of salespeople never follow up with a prospect? Yeah, it’s fake, but still, most salespeople are bad at following up.

I know because I spend time helping hundreds of customers here at Prospect.io up their follow-up game and do it like bosses

Why is it I have to do that? Because they ignore five crucial yet not so obvious rules.

Let’s check them out!

Your job is to make the sale easy for your prospect, so you shouldn’t be “Just checking in”. Especially if they already showed interest in your product; you should be asking where the situation’s at and if they’re ready to move further.

Here’s an example of what you could write:

Subject: Hey {{prospect_firstname}}, what next?

I’m following up on our conversation about [INSERT YOUR PRODUCT NAME].

We at {{user_company_name}} are really excited about working with you! What do you suggest as the next step, if any?

By giving the prospect ownership of the process, you significantly increase the chances of them taking action to move the process forwards.

Also, sales is a two-way street and putting some responsibility on your prospect helps to lock their commitment, which is primordial to pursue a healthy business relationship.

As you very well know, some prospects are harder to convince than others and more often than not, indecision tends to find its way into the process.

This is when you deliver value.

‘How we sell is a sample of how we solve, and prospects are sampling our value on each and every encounter.’ – James Muir

Tamara Schenk, research director at at CSO Insights wrote in an in-depth article that you should resort to “value hypotheses”. Those hypotheses are used to address your prospect’s current pains and encourage them to make change for the better.

According to her, you need to help your prospect learn something new that helps them understand the real impact of their problem. They should learn how they can solve the issue and what results they could achieve.

How are you supposed to do that?

Those are powerful because they show how other customers, or other people approached similar situations successfully, ideally with measurable results.

In our experience here at Prospect.io, 5 steps is the sweet spot when it comes to setting up a cold email campaign. Our largest cold outreach campaign was sent to 1792 prospects. 34% of our replies came from the fourth email alone. 38% came from the last two emails.

In total, this campaign brought us our first 144 customers.

See where I’m going? Don’t leave money on the table!

Nurture your lead, and persevere.

If after the designated number of steps, you’re not getting anywhere, ask if it’s okay to get in touch a few months later.

A bit of audacity is a great way to attract attention and leave the competition far behind. It doesn’t have to be game changing, it simply has to go beyond the ordinary and demonstrate interest in your prospect.

For example, the sales team Xpenditure likes to cold email and follow up by including personalised videos in their message. It stands out and brings a unique level of personalisation!

Are you organising an event? Good, invite them as a VIP. You think they could bring something to it? Ask them to be a guest speaker!

Asking for favors actually makes you likable. This technique was well used by United States founding father Ben Franklin in order to bring a rival legislator to his side.

As Charlie Liang would say, it’s not about making mini-minions out of everyone around you but leveraging empathy!

Also, who doesn’t like to be wished a happy birthday? Don’t be a stalker about it, but if your prospect’s birthday is easily accessible to you -through LinkedIn for example- put a reminder in your calendar and send them a personalized email! How many of their business partners actually take the time and effort to wish them a happy one?

Take that advice and apply it systematically to every interaction with a prospect. Better yet, automate it. Find yourself the right sales automation tool and schedule drip campaigns with automatic follow-ups.

Now go get those customers!