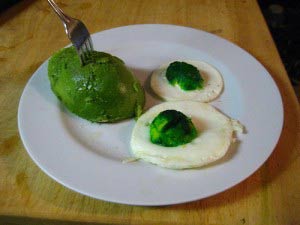 Eloquently presented with colourful images and rhymes, the book follows Sam as he tries tirelessly to persuade IT to eat some green eggs and ham. As the IT character continues to resist, showing no interest in the meal, Sam relentlessly perseveres in what has become one of the greatest sales stories of all time.

In case you have forgotten, below is a short excerpt and some paraphrasing from the book.

This goes on throughout the entire book, as Sam proves to be incredibly persistent, suggesting numerous ways that IT may enjoy the product.  Sam suggests IT try green eggs and ham in a car, a tree, in the dark, in a box, with a fox, in the rain, on a train, on a boat and even with a goat.

The IT character continues to object, until finally…

(IT tastes the green eggs and ham)

The Sales Genius
Sales trainers the world over have used “Green Eggs and Ham,” and Sam’s perseverance as a model of persistence.  However, Sam did much more than take a lot of “NOs.” Below are five successful selling examples Sam-I-Am demonstrates in the book.

1. Maintained his offer: No matter how many times the prospect said “No,” Sam never reduced his offer.  Many sales people are too quick to change their original offer or drop their price after only one or two objections.

2. Did not challenge IT: Sam never directly challenged IT’s objections or thinking.  He never asked, “Why will you not try them in a house?” Sales people often demand the prospect justify their reasoning, which creates an adversarial condition.

Understand that while you cannot get someone to change their mind, you can help someone make a new decision based on new information.

5. Had the right motive: What would Sam gain or lose if IT did not try the green eggs and ham? There is no mention of a commission.  Sam’s persistence was based solely on the fact the he knew IT would enjoy the meal. Sam wanted to help IT get something IT did not even know IT wanted.  To help the prospect solve a problem he did not even know he had.

When prospects sense that you are pushing them because you truly believe it is in their best interest, rather than your commission, your persistence is acceptable, welcome and even desired.

When you’ve got that big sale you have to land,
And feel you did everything you possibly can,
Remember the story of “Green Eggs and Ham,”
And the powerful sales example in Sam-I-Am!

PS Sam-I-Am could have pulled out the needs and wants of IT before presenting the Green Eggs & Ham to him too in a consultative selling manner!

It’s an old one but a good un: Prescription before diagnosis is malpractice!