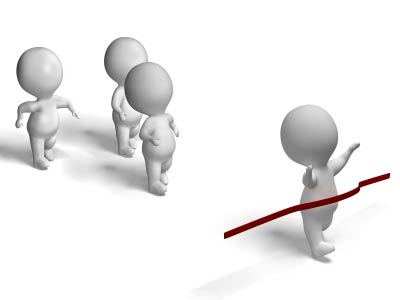 I remember years ago being on a training course where we were learning coaching skills. The facilitator was coaching someone to use a golf putter when they had never played golf in their life. It was fun to watch this person try to hit a golf ball a few yards across the room into a cup laying on its side.

The person tried a few times, and with the coach’s help, eventually managed to get the ball into the cup, to cheers and applause from everyone around. The smile on his face showed he was proud of his accomplishment, even though a little embarrassed by the attention.

The discussions centered around how we could improve as individuals and one person said that if we modelled someone like Tiger Woods (who was number one at the time), we would eventually be as good as him.

It’s an interesting phenomenon that we as humans tend to compare ourselves against others’ accomplishments and feel that we have to in some way ‘compete’ with them in order to be a ‘good’ person. The winner is honoured, the losers forgotten. (Do you remember who came second and third to Usain Bolt in 100 metres at the London Olympics?).

But that quote from the facilitator on that day brought it home to me that, actually, we would probably always lose if we were trying to copy someone else. In sales, this would include trying to use the script of someone else to sell our products, or copying a successful person’s characteristics when with a client. What could be the possible outcome?

Well, we might try to be as assertive as another person, so we can come across as being confident and assured. Unfortunately, if we move outside our comfort zone without a support mechanism behind us, we naturally fall back into that zone, as we feel safe there.

By all means take note of how successful people have achieved that success. But make them applicable to your own persona, build confidence from building your own foundations and create situations where you have the natural ability to improve, rather than thinking you must try to be like someone else.