How To Deal With The Foul & Abusive Prospect 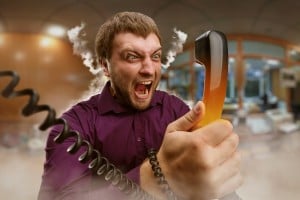 Have you ever had that time when a prospect has been really horrible to you?

I mean aggressively horrible, even resorting to swearing or downright nasty comments?

It does happen, and unfortunately for many salespeople, it can have a profound affect.

Imagine you’re making a sales call and the prospect starts ranting and raving.

They use abusive language that is uncalled for and tell you never to call again, or worse.

The effect can be devastating.

“Is it my approach? Is it my personality? Is it my product or services? Is it….is it…is it?”

The list goes on. We find ourselves blaming ourselves for what might have been totally out of our control.

Do you know the type of day the prospect has had up until your call?

No, you don’t. It could be that you simply called at an inappropriate moment, when the prospect is stressed out with a crisis.

And you are simply an interruption to his day.

No wonder they might be rude or short with you and say things that are very personal.

That could be the reason, or it maybe they are just miserable sons of you-know-what!

When you get treated that way, many people have a tendency to dwell on it.

You tell everyone else in the office what just happened.

You keep in front of mind, playing the conversation over and over in your mind.

You feel angry, resentful. You categorise the person as a jerk and vow never to call them again.

You project your feelings onto the prospect and use the expletives back on them or you have ago at them for having an affect on your emotional well-being.

Meanwhile, back in their office, they don’t even remember you.

That little interruption is lost in the millions of other things going on in their world.

You were a blip. A momentary fleeting interruption.

In effect, they don’t care about how you feel. It’s then difficult to refocus and carry on with your job. It hurts.

You fantasise about calling them back and telling them to take a long run off a short pier (or words to that effect!).

Effectively, you’re wasting precious time, energy and emotions here. You’re living in the past, unable to focus on moving on.

There must be a better way.

Yes, there is. Remember that anger, stress or negativity is simply energy needing to be expressed.

Energy exists in many forms, and it’s possible for that negative energy to be harnessed and redistributed into making things work for you.

Some of the most successful people around have had to turn disappointments, defeat, rejection and anger into irrepressible determination in order to make themselves successful.

When someone hurts you or makes you angry, take that energy and utilise it. Fill your mind with adrenaline for revenge.

Take advantage of that energy to get better, because achievement is the ultimate revenge.

When you take that energy you’ve produced from the previous bad call, you say, in effect, “Right…thanks for that response Mr Idiot; I’m now going to spend some time finding people who really need my services. There are people out there needing me. It obviously isn’t you, and you’re the one who is missing out. I’m just one call away from finding the person who needs me. NEXT!”

This isn’t pollyanna-ish, positive thinking. This is taking real energy and transferring it to make a real difference in the actions you take and hence the results you achieve.

So, next time someone has a real go at you, in person or one the phone, take that energy and pout it to good use.