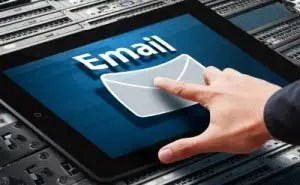 Technology has been a game-changer in every respect in our world. It’s driven everything from improvements in science to advancements in medicine. The world is an unrecognisable place from when I was at school over twenty years ago.

One of the biggest changes and advancements has come in the area of communications. Where salespeople used to have to type out letters and send them in franked envelopes to customers, often waiting days for a reply (if one came at all), now they can have instantaneous conversations with myriads of people through various messaging media. The key method, naturally, is email, and most salespeople are aware of the power of this tool.

But many still do not utilise it in the way they should to gain the biggest benefits, and here are five mistakes that can make it an enemy rather than a professional friend:

1) Using email when it’s inappropriate. By this I mean that many people resort to sending email when a phone call or face-to-face conversation would have been better. How many times have you sent emails back and forth to someone, sometimes losing track of the meaning or misinterpreting what’s being said, only to end up actually picking up the phone to the person to clarify what’s going on? It’s really frustrating to spend such a long time creating the written message when it would have been appropriate to clear the matter up simply by conversing with the people involved.

There’s no hard rule on this, but the guideline should be ‘if it’s quicker, easier and more sensible to pick up the phone and have a discussion, then do it!’

2) Forgetting to ask for the next steps to continue the conversation. Very often, we see emails that give a great deal of information, even building up desire for what is being promoted, only to find that the ‘call to action’ is weak or non-existent.

You should propose, directly or indirectly, what is going to happen next. Are you going to send more information? Follow up with a phone call? Plan a meeting in the next week? Lay down timelines for the next sequence in the business relationship? Then say so in your email.

It doesn’t take a genius to work out that the only way you’ll get a sale in the long term is to advance the sale someway at every point in the conversation. Use the email to do so.

3) Mismatching the tone of the other person. If you have been contacted by a prospect and are replying to them, make a note of how they have phrased their email. Are they rather formal in their language? Then it would be inappropriate to write back with jargon or abbreviations that might not be understood. Recognise how they have approached you and try to maintain the same tone level with them in replying.

4) Answering in short or one-word phrases. After I’ve asked a question of someone, I often get emails back with just the word ‘yes’ or ‘no’ as the body of the text.

You have no tone or body language in an email. You don’t know the intonation that someone is using. A one-word answer may well come across as arrogant or superficial to the receiver, so at least try to write a complete sentence so there is less danger of misinterpreting your tone.

5) Sending attachments too early in the relationship. If you received an email from someone and you weren’t sure of the motive of that person, or you didn’t know them, or you weren’t expecting it, would you think twice before opening it and running the risk of viruses? Most people would.

So the rule of thumb should be to leave of the attachments until the receiver knows who you are and/or has given you permission to send an attachment through.

Emails are an absolute necessity and a god-send to salespeople; just make sure you don’t jeopardise your professional image or your business relationships by making these mistakes when sending them.