How Your Buyers Make Their Decisions – Part 4 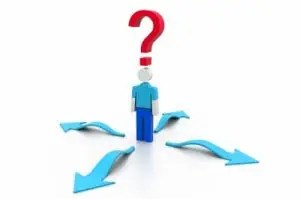 In Part One of this series, we looked at motivational direction. In Part Two, we discussed Frames of Reference and how they are diagnosed. Part Three covered how people match or mismatch in their decision-making philosophy.

Here, in Part Four, we identify how buyers convince themselves they are making the right decision to choose you.

People’s decision-making criteria will always give away a lot of information, as they help you understand their beliefs, values and behaviours.
Buyers make decisions based on a series of criteria that makes sense to them. So if you can identify their view, you can determine how best to help them buy your solutions.

One thought process your buyers will go through concerns how they convince themselves that they have made the right decision. This normally follows two distinct patterns or shapes.

The first revolves around what a person does to have confidence in what they believe is true; the second revolves around how often they have to experience something before they accept it as believable and true.

When a person is convinced of something, it gives them the confidence to make a decision. They have moved the burden of proof from the sub-conscious to the conscious mind, or the pre-frontal cortex, as it is properly known.

Think about your last deal. What made the prospect move from thinking about it to actually making the decision to say yes?

Did they SEE the product in action or see the results that your products and services would give them? Or did they HEAR something you said and then made a decision based on the discussions. convincing themselves that they had heard enough and now was the time to move ahead?

Maybe they READ your brochure or a testimonial on your website. We get many calls at MTD HQ from people who have read our client references and call us to book a course or enquire about in-house programmes. They are convinced by what they read.

Or maybe your last customer had to use your product or service and see it in action before they decided. That means the burden of proof lay with you to personalise the service to their specific needs. They needed to be convinced it will actually DO what you say it will.

Whichever convincer pattern the person used, if you could repeat that on the next call with them, you’re more than likely to hit the hot button of decision-making criteria.

Another element of this strategy buyers use is the amount of times they have to experience it before they are convinced.

Have you ever made a decision the very first time your saw something? Then you were on AUTOMATIC pilot, and made a decision immediately, because of the way it looked, how it sounded, the value it presented in your mind or something similar. The point is, you were convinced immediately.

With others, they may need to be convinced a NUMBER OF TIMES. This may mean they have to hear a series of testimonials or identify many occasions when it has worked before they are convinced or sure.

Still others need a PERIOD of TIME before they are convinced they are going the right way. This doesn’t mean they aren’t sure before that…it just means that they won’t make a decision until the time period they have designated as the right one for them has past.

Finally, some buyers are never convinced for all time. They need to be CONVINCED every time. The principle followed here is that the supplier is only as good as their last job. Here, you have to make sure all your ducks are lined up every time you present to them.

By identifying how the buyer is convinced they are making the right decision, you ensure you are laying the foundation for commitment without having to use closing tricks to get them to say yes.

In the final part of this series, we will check the differences between what is necessary and what is possible to a buyer.